Crafted in Germany by master craftsman Colin Goldie, Goldie whistles are renowned around the world for their superior sound quality and design.  Browse our current stock of low and high Goldie Whistles below.

Colin Goldie lives in Germany and enjoys a global reputation as a meticulous craftsman, innovator and whistle maker. Goldies are always in great demand and this name has become a byword associated with quality assurance and dependable sound quality.

Colin has a strong Celtic family background. He enjoyed music making as a child and soon became strongly influenced by Irish Bands. In later years, whilst reading the www.chiffandfipple.com message boards he was interested to read about Packie Byrne, the legendary Irish Whistler, the name seemed familiar to Colin – so he got in touch. It was to Colin’s amazement that he discovered that Packie’s grand parents are Colin’s great grand parents! 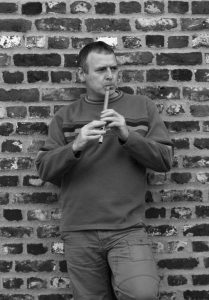