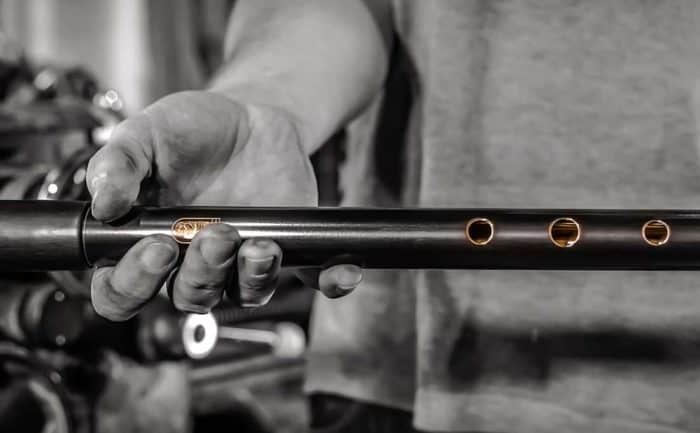 First developed in the early 1970s by Bernard Overton, the low D whistle has grown in popularity over the decades. The warm, deep, flute-like tones of the low whistle have made it a popular musical instrument amongst folk musicians and even some jazz musicians worldwide. Today, low D whistle makers are popping up all over the globe. These makers include some of Overton’s own students, as well as new and innovative instrument-makers. Each of these whistle brands brings something unique to the table, whether that’s improved playability, sound-design, or value for money. In this article, we outline five of the most-popular and arguably best low D whistles on the market today.

Colin Goldie is a master craftsman, and his name is legendary in the world of whistlers. Now based in the German countryside, Goldie used to work closely with Overton. He turns out relatively small batches of his extremely popular whistles. The brushed aluminium finish and distinctive square whistle head make the Goldie whistle easy to recognise. Its tone is silky, full, and resonant. Goldie whistles come in a range of blowability, to suit your preference, from soft, medium, to hard blowers. He produces whistles in a range of keys, including high whistles. The Goldie low D whistle remains a firm favourite.

Howard whistles trace their heritage back to the earliest days of the low whistle. Brian Howard, the founder of Howard Music, worked closely with legendary folk musician and whistler Finbar Furey. Howard’s whistles draw on a wealth of experience and craftsmanship. A historic brand, the Howard whistle carries the title of the oldest low D whistle in continuous production. But the Howard whistle also benefits from continuous innovation. Handed over from Brian Howard to David O’Hagan in recent years, O’Hagan has polished many elements of the design, as well as introducing a range of injection-moulded mouthpiece/heads to offer a wider variety of both harder and more mellow tones, and extended life for the whistle. Manufactured in Sheffield, UK, the Howard low D whistle is available in a sleek black, or brass finish.

Masterminded by Rob Gándara in Oregon, USA, Carbony whistles draw on cutting-edge technology to create an excellent-sounding low and high whistles with a rich tone. Since its foundation in 2006, Gándara has been making these whistles from his innovative Carbony™ carbon-fibre composite. As well as being extremely tough and resistant to cracking, rotting, and other damage, the Carbony low D whistle offers brilliant playability. Carbony also offers the best low D whistle for small hands in the form of their close-spaced big bore whistle.

The MK Pro low D whistle enjoys a growing reputation as a brilliantly playable, sweet-sounding low D whistle. Crafted by Misha Somerville in Scotland, the whistle was first designed in Loch Ness in 2000. The ergonomic positioning of the finger holes on these tuneable, aluminium whistles makes for comfortable playing. MK also offers a budget alternative – the MK Kelpie low D whistle – but the Pro low D wears the crown! It looks great in a range of colours.

Tony Dixon offers the best low D whistle for beginners or those working with a tight budget. Both the tuneable Dixon low D polymer whistle, and the polymer/aluminium body whistle offer a brilliant sound, at a surprisingly low price point. The metal bore combined with the plastic mouthpiece offer an excellent, bright tone. If you’re just starting out on the low D, and looking for an entrance, look no further.

If you’re looking for a low D whistle on a tight budget, we recommend a Tony Dixon whistle. The Dixon One Piece TB003D comes in at under £60 or roughly $82. And it sounds great!

A couple of brands have created ergonomic whistle designs for smaller hands, so that you can reach all the finger holes. We think the Carbony Big Bore Low D with Close Spacing is the best of the lot.

Need advice on which low D whistle to buy? Get in touch! We’d be more than happy to advise.

Low G Whistles: Here Are 4 Of The Best